The Chapel of Our Lady of Compassion 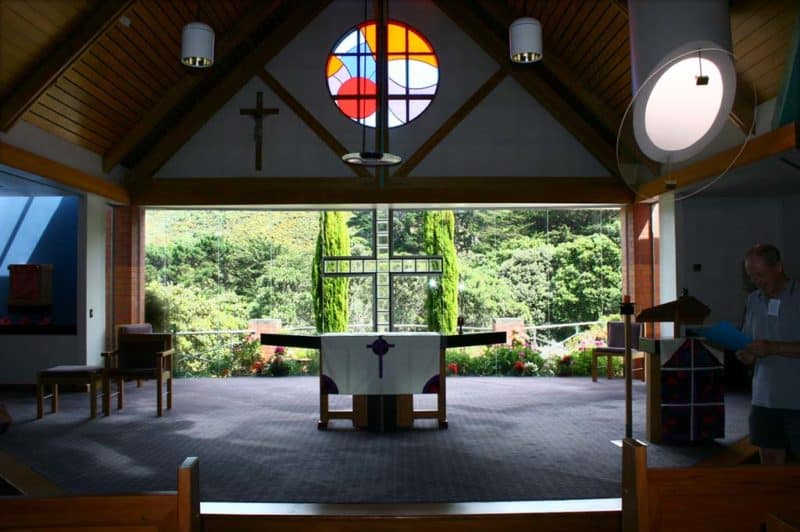 The Chapel of Our Lady of Compassion in Island Bay, Wellington, was designed and built in the 1980s.

The stained glass windows were designed by John Drawbridge, the internationally acclaimed New Zealand artist based in Island Bay. The glass work was carried out by Peter Kirby of Paraparaumu. The entry window in the foyer is reminiscent of the great rose windows of European cathedrals. It forms a cross within a circle within a triangle. Symbols include the cross (Christ’s sacrifice, death), the circle (the perfect shape, a renaissance concept of God), the host within the Mass (eternity) and the triangle (the Holy Trinity). The artist chose compelling primary colours–blue, red and yellow, relieved by blocks of white. Occasional touches of green, pink and orange are there to ‘surprise’ the eye.

Although it is not mandatory for a chapel to have the Stations of the Cross represented, the Sisters of Compassion wanted to include them because of their particular significance for the Congregation, based on the example of Mary, the woman of the compassion who stood at the foot of the cross. The four stations from one group are along the northern wall. The remaining ten are lined along the eastern wall. They can be illuminated at night.

The tower windows sited above the entry window are in a range of lighter, more varied colours–pinks, pale yellows, greens, blues and reds. Their purpose is to let plenty of light down into the body of the Chapel.

At the back of the sanctuary is a series of long panel windows forming a slight arc. These windows afford a view out into the bush and gorse clad Wellington hills. Although this is an exposed part of Island Bay, often buffeted by strong winds, nevertheless it offers an opportunity for contemplation for the worshipper or visitor. The window is bisected at its centre by a simple cross made from glass blocks.

Parts of the marble altar which was in the old Home have been incorporated in the Chapel.

The holy water font was made from the marble pedestal which held one of the angels and it is in the foyer. Pieces of old marble altar have been inlaid in the wooden altar, as well as being used to hold the candles and the engraved crosses necessary for the dedication ceremony.

The Pieta statue in front of the Chapel is a gift from the Seymour family.

The two newell posts are from the staircase from the old Home and are used as flower stands.

Many features from the old Home were incorporated, and right from the inception, John Drawbridge and his wife, Tanya Ashken, a sculptor of note, joined with the architects (Structon Group) and craftworkers worked together to bring to fruition a beautiful and prayerful structure.

On the Solemnity of the Annunciation of the Lord, 25 March 1990, Our Lady of Compassion Chapel was dedicated and opened as the Sisters first permanent Chapel. 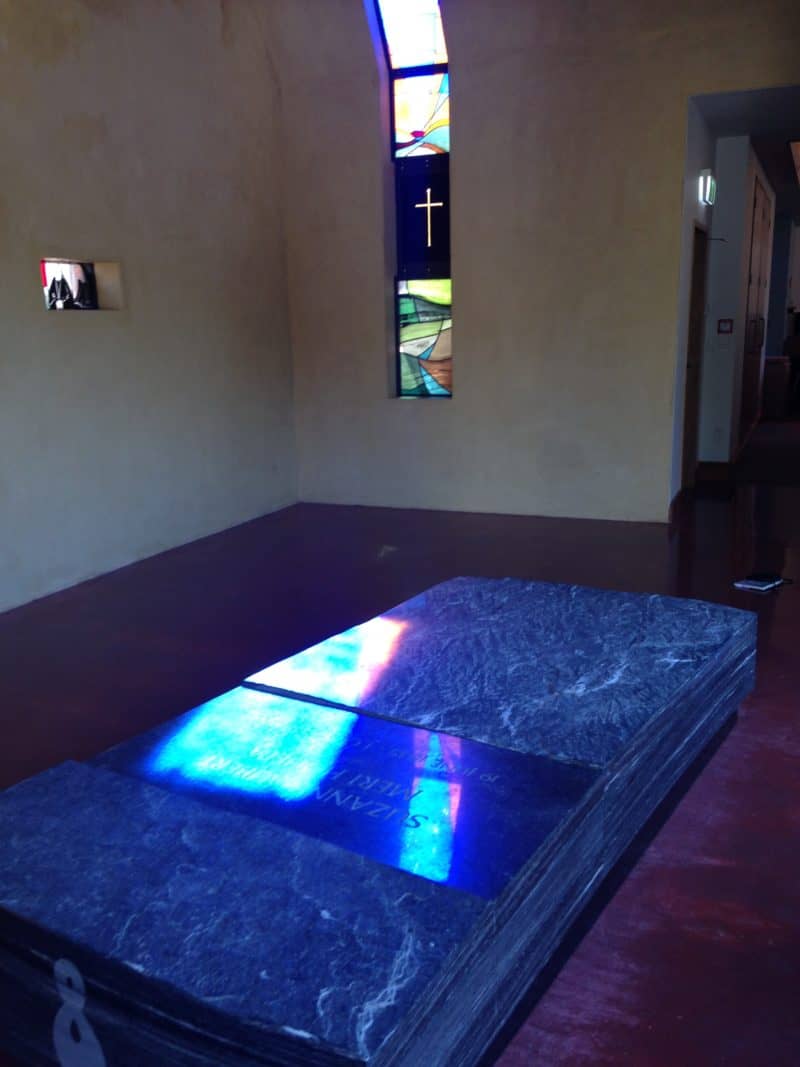 The final resting place of the Venerable Suzanne Aubert was blessed on Saturday 14 October 2017 on the 125th anniversary of the founding of the Sisters of Compassion.

In January 2017 Suzanne’s intact casket was reinterred in the new Resting Place beside the Chapel of Our Lady of Compassion. The Resting Place, designed by Tennent Brown Architects, is a tranquil but simple space accompanied by thoughtful design. Visitors may bless themselves upon entering and leaving the resting place. A sarcophagus of Waitaha stone is at the heart of this space.

Stained glass windows dapple light across Suzanne’s resting place across the day. The morning window (designed by Tennent Brown) depicts Mātāriki (or the Pleiades constellation), the Southern Cross and the Whanganui River.

The Resurrection window (gifted by the Drawbridge family) depicts the fifteenth Station of the Cross, completing artist John Drawbridge’s Stations of the Cross installed in the Chapel in 1990. 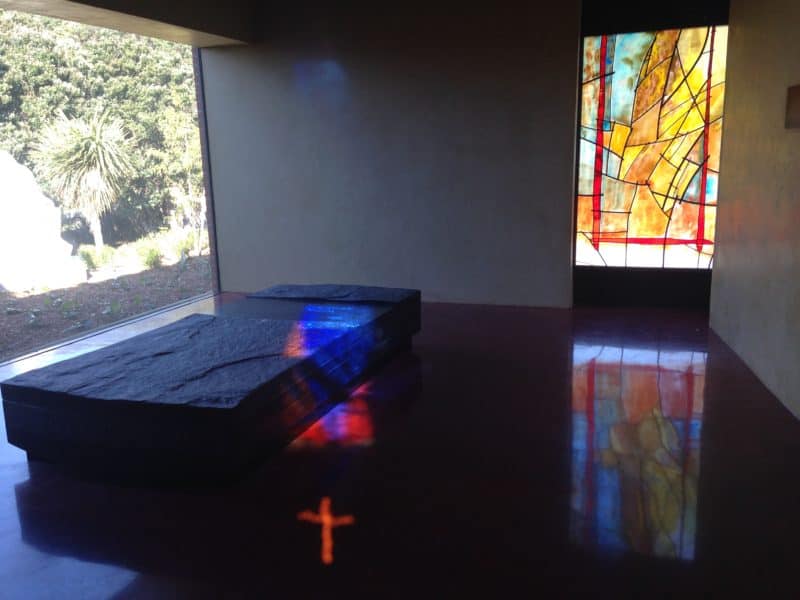 A series of tūpuna (ancestral) windows depict and link formative people in the history of Suzanne Aubert. Sister Peata, of Māori decent; Saint Jean Vianney, the French influence; Mother Cecilia Crombie, Superior General after Suzanne Aubert, and Sister Angela Moller, her dedicated secretary; are some of those cast in her beautiful story.

An expansive glass window views out to nature and the hills beyond, with the original Pietà, which Suzanne ordered from Italy, set in the foreground.
The resting place is complemented by the adjacent Suzanne Aubert Exhibition, and the Retreat Centre along with several new spaces in the Heritage Centre and grounds.

The Chapel and Resting Place are open to all 10am-3pm Monday to Saturday, and 12noon-3pm Sunday. Please phone for opening hours on public holidays 04 383 7769.